Salisbury Museum PAS (Portable Antiquities Scheme) Volunteers enjoyed an exciting day of training last week. We have met James Dilley, of Ancient Craft, before, trying out flint knapping, but this was even better. Making a replica of a Bronze Age axe.

On an initially rather disappointingly grey day we gathered early on the lawn behind the main museum building to find James ready for us with bellows already ramping up the temperature in a small furnace. 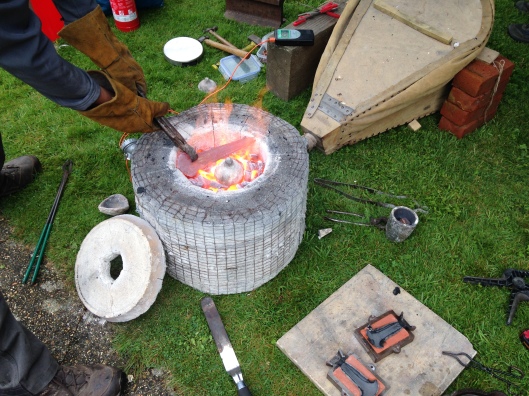 We were shown how to prepare a two piece mould from green sand (which was actually red) with care being taken to pack the sand properly to avoid problems which could include the whole thing blowing up. The required impression in the sand was created by placing an axe head (one made earlier!) within the sand and removing it before placing the mould close to the furnace to take the melted metal. 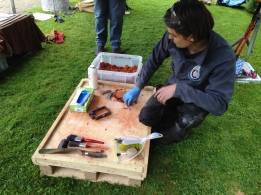 With the furnace at around 1200c, bellows being patiently pumped by one of our number, the mix of 9 parts copper to one part tin, placed in a crucible nestling in the charcoal, was poured into the mould. Glowing white, silver, yellow and red, the molten bronze quickly filled and then overflowed the mould. Within moments, it was cool enough to pull the two pieces of the mould apart (with gloves) and to pick out the already solid axe head with tongs, dropping it carefully into water in an iron pot nearby. Hissing and bubbling followed, but again, within moments, it was cool enough to pull out by hand. What magic for us, and what magic it must have been for our forebears four and a half thousand years ago.

The process was not, of course, exactly the same for us as it would have been for Bronze Age peoples. For them, the whole business of obtaining and transporting the right ore, extracting the copper (probably in Britain it mostly came from Ireland) and the tin (Cornwall) and experimenting endlessly with the right proportions, building furnaces that worked, finding the right materials for moulds, and so on, must have been testing. But worth it. And for us, we learnt so much about how and why the historic artefacts we receive and record might sometimes have had imperfections in them, how decorative features would have been achieved, why sometimes it went horribly wrong, how the axe heads were fixed to handles, how they were sharpened, polished.

We also understood, more than ever before, why these objects were apparently close to sacred to the people at the time. The ones we made were pretty special to each one of us.