Amongst the 2018 winners were: 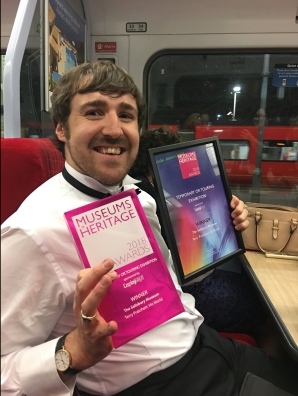 The Salisbury Museum’s Wiltshire Finds Liaison Officer Richard Henry (Curator of the exhibition) together with colleagues and friends, enjoyed a triumphant evening in London last week at the Museums and Heritage Awards ceremony. Nominated in one of the categories for 2018, they came out winners. “It was a fabulous evening” said one colleague on return, and indeed it was.

Regarded as the Oscars of the museums and heritage industry, the Awards ceremony is attended by hundreds of sector professionals who join to celebrate the incredible achievements and groundbreaking projects of the past 12 months.

The winners and runners-up in each of the hard-fought categories were announced by Reverend Richard Coles  at the Historic State Rooms of 8 Northumberland Avenue in central London.