Alan Clarke brings us more interesting photographs and a fascinating story of the connection between High Street, Salisbury and the Stonehenge Woollen Industry which we heard about last week.

A standing live ram held by a hoisting belt was the emblem adopted by the Duke of Burgundy when he founded the Order of the Golden Fleece in 1430.  He obtained great wealth from the wool trade in Flanders.  This emblem, the golden fleece, was adopted as the traditional sign of a woollen draper’s shop.  Hence the carved sheep above the former SPCK shop at 51 High Street, Salisbury. 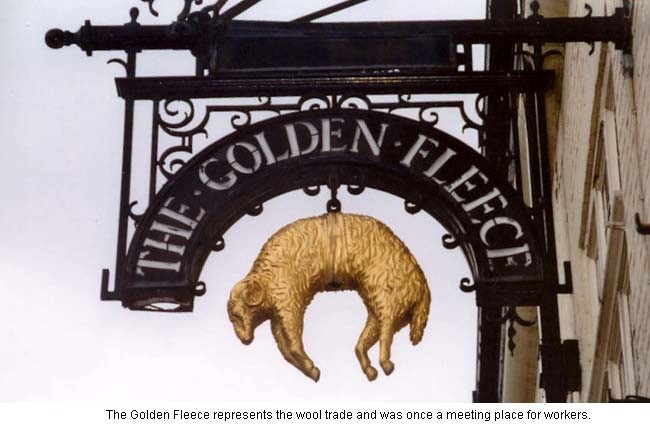 Charles Scammell, an antique dealer, sold 51 High Street to Catherine Lovibond in about 1919.  Catherine was the youngest of three daughters of Joseph Lovibond (1833-1918), a former Mayor of Salisbury (1878-1890), who lived at Lake House, up the Woodford valley.  He was chairman of John Lovibond & Sons, Ltd, and of The Tintometer Ltd.

Catherine trained as a designer and took an interest in spinning and weaving. Encouraged by her father who had no sons, she started to teach the local women the processes involved, setting up looms and spinning wheels in Lake House. At first things did not go well but gradually the scheme caught on, so that by 1900 some of the products were being exhibited at the Albert Hall.  A company called the Stonehenge Woollen Industries was formed and despite a fire which almost destroyed Lake House in 1912, expansion continued, moving to Stratford sub Castle after the death of her father in 1918. Retail outlets were established in four places including 51 High Street, Salisbury.  This is when the carved sheep was placed over the High Street door to denote her trade. 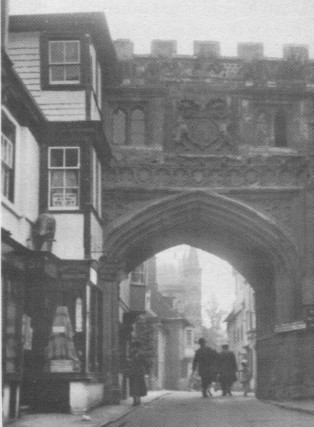 51 High Street, sheep in view to the left

Catherine married Major Radcliffe James Lindsay Bashford in 1919 but he died soon afterwards on 20 August 1921.  Then in 1929 she became the third wife of Rowland George Allanson Allanson-Winn; Lord Hedley.  In his youth he had been editor of the Salisbury Journal for two years.  He died 22 June 1935.

After the death of Catherine (Lady Headley) the business carried on for some years and it was not until 1959 that the shop was sold to the SPCK who at the time occupied 56 High Street, Salisbury.  The sheep trade sign was retained and remains to the present day.

A lady who lived close by me was 99 years old when she gave me an interview.  She told me she used to work in the High Street shop as a young girl.  She still had a Stonehenge Woollen Industries’ scarf.  The shop used to supply patterns and wool for people to knit orders, often to be fulfilled in 2 or 3 days.  Catherine used to travel to London by train to sell the items and to take orders.  Another neighbour remembers her mother knitting frantically last thing at night to finish off a garment.  Catherine originally set up the industry to provide employment for those in the countryside however its greatest use was to give employment to those returning from the First World War. 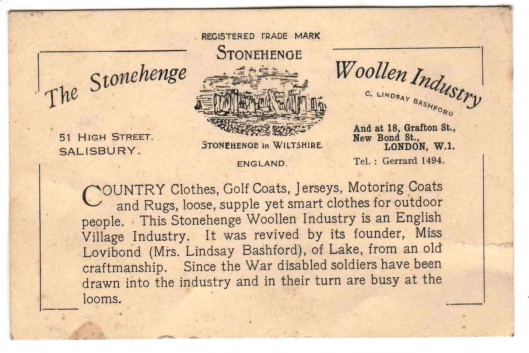